Coronavirus: When will it be safe to fly again?

Aer Lingus has said it will review its procedures following a claim it did not maintain social distancing among passengers on a Belfast-London flight.

But when can air passengers expect things to return to the way they were before coronavirus?

How many people are still flying?

Far fewer people are flying since the Foreign Office advised against international travel.

Between 16 and 22 April, for example, the number of air passengers coming into the UK was 99% lower than the same period in 2019.

American Airlines said social distancing had been possible "for all passengers", suggesting that its aircraft have a lot of empty seats. And Virgin Atlantic said many of its flights in April were only a quarter full.

Meanwhile, Ryanair carried 40,000 passengers in April - down from 13.5 million in the same month last year.

With the holiday trade almost completely dried up, most of those flying were UK nationals returning home.

How safe is air travel?

If you have to fly, it's a common belief that you are more likely to become ill on an aeroplane, because you're breathing "stale" air.

However, according to the World Health Organization, the quality of air in a plane cabin is very carefully controlled. It may be better quality than in the average office or shopping centre.

While there are more people per square foot on a busy plane, which can increase the risk of infections spreading, the air is also being changed at a faster rate.

However, there is a greater likelihood of the virus being transmitted if passengers are close together - usually as a result of an infected individual coughing, sneezing or touching surfaces.

This is the same as in any other situation in which people are close to each other, such as on a train or a bus.

What's the advice for air travellers?

The National Travel Health Network and Centre - which was set up by the Department of Health - offers the following advice:

You should not be travelling if you are unwell, or if you have tested positive for Covid-19.

At UK airports, the advice is similar to that given in any large public building - keep your distance from others, and use the hand sanitisers provided by the airport. Shops and restaurants have been mostly closed and people are discouraged from entering the terminal unless they are travelling.

Can there be social distancing on flights?

EasyJet has said it plans to keep the middle seats on planes empty once the lockdown is lifted.

The airline suggested the measure could be taken for a short period as flying resumed. Emirates and the US airline Delta have announced similar plans.

But not all airlines are happy about the prospect. 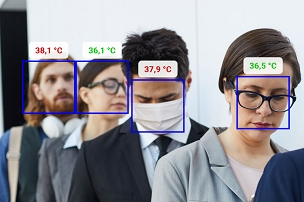