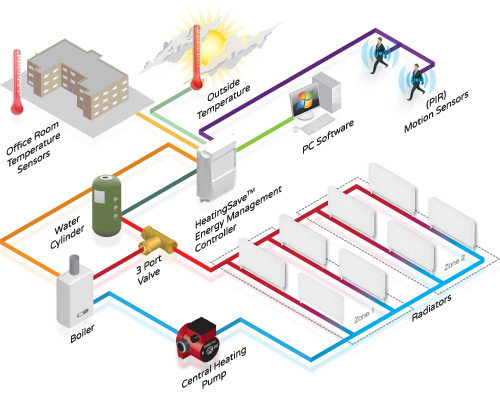 ·       Detecting, alerting, and controlling alarms and other conditions

Traditionally, Building Management Systems (BMS) were not built for small building structures. HVAC, lighting, plug loads in many of these buildings are not properly controlled. However, on a global scale, small buildings make a significant difference. For example, uuncontrolled building operations of small buildings lead to unnecessary energy waste of 10% to 25%. By deploying cost-effective controls systems significant portion of the energy that is currently wasted can be avoided.  While some buildings were unable to deploy a BMS in the past, perhaps now is the time for a retrofit? Existing scalable technologies provide so much in a single package and have become inexpensive, bringing large building technology and experience to small buildings!

Its primary role is to control the climate within a building, including temperature, carbon dioxide levels, and humidity. Controlling heating and cooling, managing the systems that distribute this air throughout the building (for example, by operating fans or opening/closing dampers), and then locally controlling the mixture of heating and cooling to achieve the desired room temperature are all core functions of most BMS systems. A secondary role is to monitor the amount of CO2 caused by human activity, mixing in outside air with waste air to improve the amount of oxygen while reducing heat/cooling losses. BMS systems are sometimes linked to access control (turnstiles and access doors that govern who is permitted entrance and egress to the building) or other security systems like closed-circuit television (CCTV) and motion detectors, in addition to regulating the building's internal environment. A BMS may also be linked to fire alarm systems and elevators. For example, if a fire is detected, the system may shut off dampers in the ventilation system to prevent smoke from spreading and dispatch all elevators to the ground floor and park them to prevent people from using them in the event of a fire. BMS is comprised of software and hardware; the software programme, which is usually configured hierarchically, can be proprietary, using protocols such as C-bus, Profibus, and so on; however, new vendors are producing BMSs that integrate using Internet protocols and open standards such as DeviceNet, SOAP, XML, BACnet, LonWorks, and Modbus. Figure below shows an architectural approach for small buildings control options.  Hybrid IoT controller is an excellent example of a single device that can meet the majority of requirements. it is designed specifically for small and medium-sized buildings, includes multiple I/O for Direct Digital Control, a powerful Framework with the ability to merge multi-vendor automation systems into a single scalable solution, with real-time data visualization and control, and touch control of the screen or mouse and keyboard connection.  BMS implementation in small buildings appears to be even more advantageous for developers with a large number of similar buildings. The notion of a mini-BMS in every building is a huge step forward in bringing the goal of Smart Cities closer than it has ever been! Having a single multi-site system with worldwide access to building analytics might lead to even greater energy savings in the future with advanced building optimization.